We sat down with Master Extractor and Jetty co-founder Nate Ferguson to chat about life in cannabis. Nate’s been in the business for longer than he should probably (and legally?) admit. Lucky for us, he’s willing to spill the details anyway.

Jetty is one of the first vape companies and pioneered many of the processes used in the industry today. Have you always had an interest in the process of extraction?
Ha, No. It was all out of necessity. I was the guy who had the weed connection to a lot of the farmers and I was running the machines. The sales pitch we got for our first machine back then was like, you put the weed in one side and then it spits out oil on the other end into a vape cartridge and that's pretty much it. Yeah, not so much! The industry was so new [in 2013], we didn't know what was true or wasn't. The refinement processes were new and we just had to try them all. We had to figure out if the oil wasn't viscous enough--or even what the hell viscosity meant. But through it all I fell in love with the chemistry of cannabis.

Speaking of chemistry...How about the science behind extraction?
Basically, if we liked it, we grew it. I knew there were terpenes and cannabinoids but I didn't really pay that much attention to that aspect. In the beginning, for us it was just THC and a plant basically. Learning biology and chemistry and what actually goes into the plant, it's all stuff that we learned along the way. We had to if we were gonna make the product that we wanted to smoke.

Back then it was impossible to find information on a blog or anybody that wanted to talk about extraction. Now you can YouTube extraction and a million things will come up. Even the guys that were selling you the hardware had these disclaimers like, we're not selling this for cannabis, this is for essential oil extraction. It was tough back then to figure it out. A lot of us were just combing the internet for little bits and pieces and a hell of a lot of trial and error. We did a lot of things wrong for sure.

What’s the process like today?
Man, we still make what we like to smoke. We’re just way better at it now. We’ve honestly tried every process there is to extract oil. Right now it’s hydrocarbon extraction with ETS machines. But we’re constantly improving the process, doing more to preserve the terpenes and the whole plant. We’ve got a PhD on staff. A plant manager. We can do all kinds of cool experimental shit just because we love doing it. Not only hydrocarbon and cryo-distilling terpenes, but small runs of diamonds or live resin--whatever we feel like making.

With all this new technology and better chemistry, have we taken the craft out of extraction?
It’s totally possible now to buy distillate, source some terps and put some oil out on the market. That’s the mass market side of the business that kinda blows my mind, considering how far it’s all come. But we still believe in the art side. It all starts with the input material [cannabis]. We’ve worked with small farmers for years to get the strains we want. We know where it’s grown and how it’s grown and that our farmers use organic and sustainable methods. We know it’s clean and will have the flavor and potency we want. So yeah the chemistry and the equipment are super important, but so is the recipe and the way we do things. A kick-ass kitchen still needs a great chef, you know?

How did Jetty come about?
The idea of Jetty spawned when we were growing hydroponically indoors in Vista. Back when it was only Prop 215. We were on the second floor and we had this reservoir we used to filter our water. These 55-gallon drums. One night they overflowed and flooded our place. And flooded the guy downstairs too. But the guy downstairs was doing vape pen CO2 stuff and that's when we first started talking about it. He was like, "hey you guys flooded my place you have to pay for these tiles that you ruined," and this and that. He walked us through what he was doing. We thought, this is pretty cool...maybe we should go into this side of things. 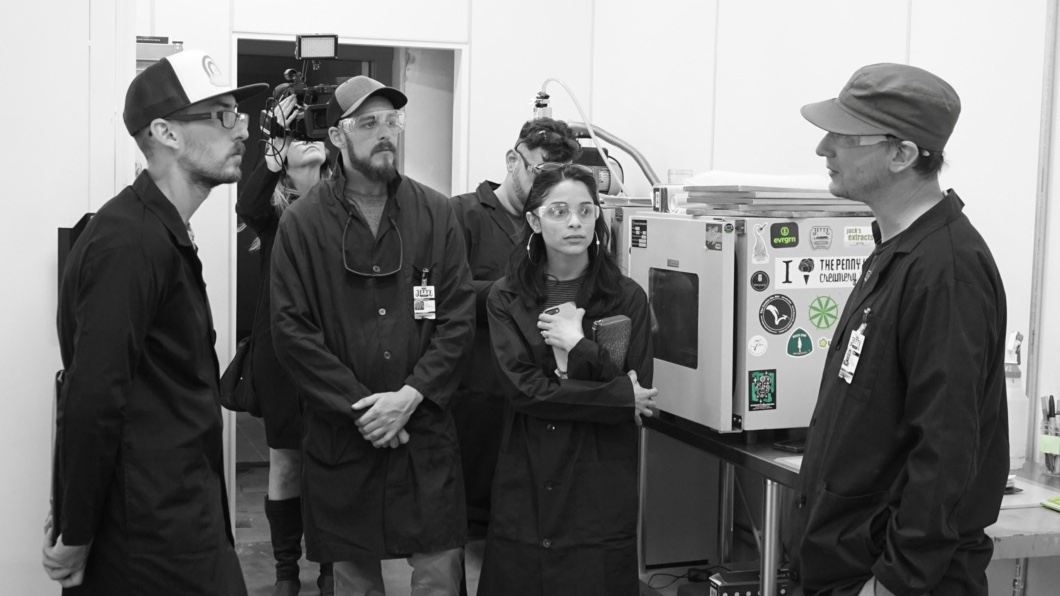 Nate giving a tour of the lab.

How did you first get into the cannabis industry?
Ever since I was a little kid I've been a big fan of marijuana and weed. Pushing my skateboard around as a little punk. I was exposed to weed by an older crowd. Back then it was schwag then kine bud into hydroponically grown stuff from Canada. I always hustled a little bit when I was younger. I moved to Utah and was a snowboard bum for 5 or 6 years. While there, some of my friends got me connected to some NorCal guys. This was in the black market /guerrilla days when it was just Prop 215.

Then we moved to Southern California and I was a golf instructor. That wasn’t paying the bills! Everyone was starting a shop for weed back in 2010 so I thought, why can't we do that? So I called a couple of those NorCal guys that I met in Utah and they said, “shit man, we’ll fund it if you run it and give you the supplies.” I needed to put marijuana on the shelves so I found a place in the Gaslamp in [Downtown] San Diego and that was my first exposure to the “industry” in California.

From there I met a bunch of people. Matt Lee (who's our other partner) was a vender, running weed down the I-5 and selling it to my shop. From there we collabed on a couple grows together. Went through a couple raids together in San Diego.

If you could go back in time and tell yourself to do something differently what would it be?
Differently? That's a hard question. I feel like we learned so much through our mistakes. I'd probably tell myself to be less paranoid and enjoy life more because there were probably times where I lost a lot of sleep over nothing and you know, in some respects that [paranoia] got us to where we are. From moving around so many damn times running from the cops. Yeah, I spent a lot of time worrying about helicopters and police kicking down the doors when I should have been snowboarding more. I would say also that I would have paid more attention to chemistry in school.

What do you appreciate most between then and now?
I dunno, I kind of appreciate the new regulations but miss the old days too. It used to be that if you had the balls to do it you could  just open up a shop and sell weed because there's no one regulating you at all. It was your own world. Your own ethics. And some shop down the street could be selling some crap that was sprayed with pesticides. That was the bad part. We were self-regulated and we took pride in that. Taking care of people and putting out a great product. I miss it because you could do things quickly. Now, to change one sku I have to think of five different permits and equipment I have to get verified and proved and listed by an engineer. There's a lot more red tape to go through before I can do anything, and it slows down the progress of the industry. Back then it was what helped the industry move so rapidly because I could jump into it so much more easily. Now, if you don't have money or capital it’s really hard  to get going. So it's harder to push the envelope in that sense.

The paranoia that came along with those days wondering if I'm going to get raided any day...that's what I don't miss.  In the old days we used to fill the front of our place with lavender and shit to make it seem like we were doing essential oils. Now, police sit outside our building up here in Oakland and I welcome their presence. They're looking out for us.